Its Friday again Yay!
And I'm back with another project for you. This time I have created something that showcases the versatility of Brusho as a painting medium and dare I say perfect alternative to using watercolour. Many of us regular Brusho users explore the vibrancy, explosive richness of hue and beautiful colours that Brusho can offer. But it is also capable of producing such wonderful pastel shades and tones of grey when diluted with plenty of water.

My first task was to see how individual colours looked in their strongest and at their palest.  I used Scarlet, Yellow, Prussian and Emerald. Mixing a small amount of water to the colours on a palette I painted these onto my worksheet and then compared them to a highly diluted mix. This is often such a tiny amount of Brusho crystals so imagine how long each pot will last when using in this way. Great value for money!
These colours then made lots of shades and tones of grey when all put together in varying ratios. 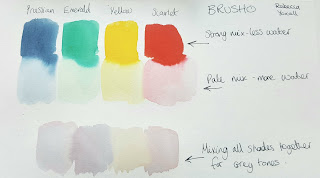 I mixed together a small amount of each of the diluted colours in different amounts. Depending on how much of each of the four will give greys that are biased to the predominant colour. I tend to go with my instincts on which I prefer and which I would like to use and then mix up a larger amount so that I don't run out part way through a painting.

Lots of colour mixtures will create shades of grey but I try and use a red, a blue and a yellow so that I have roughly one of each of the primary colours.

I have plenty of mixes of colours at this point and decided on one grey that had a blue bias. Using this shade I painted a wash for the sky.  Then brushed in some hill shapes with a range of the mixes so that they blend together using a half inch flat brush

Once this was dry I began adding some trees. Keeping it simple with some in focus and others adding a background depth. The next few images show how I built up a tree shape. 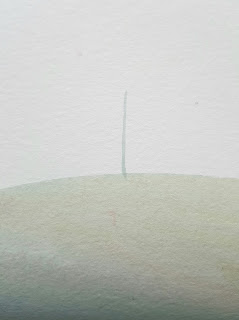 Painting a line for the trunk 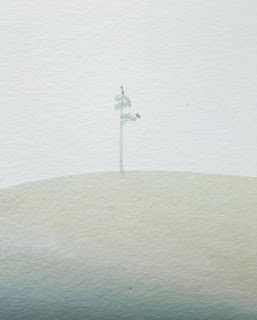 Using a small round brush I began adding little splodges at the top gradually building as the image below shows. 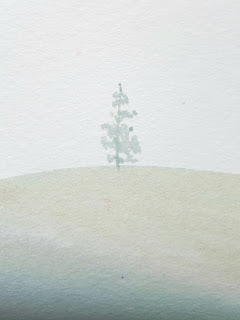 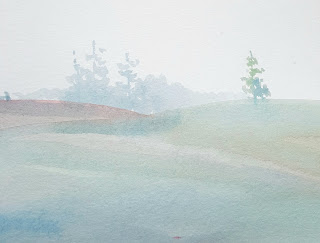 Some trees became blended together and overlapped to capture the sense of distance. 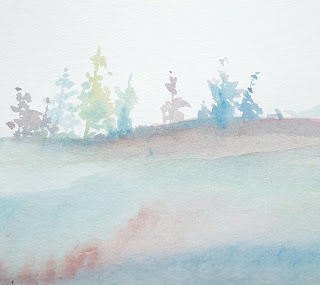 Over the other side of the piece I experimented more with the subtle changes of grey shades.

Once I was happy with the amount of trees dropping in a slightly richer colour onto the hill under the trees helps to ground them and stop them potentially looking like they are floating.

The final image demonstrates how I added 2 darker trees by mixing the Emerald and Prussian Brusho together to create a focal point and some darker contrast. But anything goes!!
Maybe a few birds flying past, a fence, a path, a cottage could add some great interest.


Thanks for reading.
Wishing you a great day.
If you have a go yourself we would love to see your creations